How do we find the projection that maximizes the class separation of the data? LDA states that maximum separation is achieved when the distance between the two clusters is maximum (or far away from each other). We consider the classification of two classes first, then generalize to more than two classes.

denote the means of data after projection which belong to class RED and BLUE respectively.

denote the scatters (variances) of data after projection which belong to class RED and BLUE respectively.

to be large and the summation of the scatter

to be small. Therefore, the objective is to maximize

The numerator can be expressed as

The denominator can be expressed as 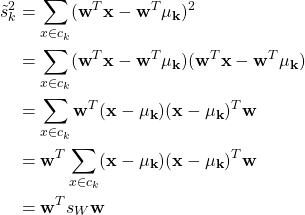 Therefore, the objective function is

Taking the derivative and setting it equal to zero.

is a scalar, the expression becomes

is the eigenvector of

is the corresponding eigenvalue.

When there are more than two classes, the between-class scatter matrix is defined as

is the global (overall) mean.

The within-class scatter matrix is defined as

The number of components is defined as follows:

is the number of classes.

Solving for Eigenvector and Eigenvalue

is an identity matrix.

is an identity matrix.