The main problem in machine learning is how to ensure the predictive models perform well not only on the training set but also on new data. Numerous methods have been introduced to improve the model generalization. These methods are collectively known as regularization. This section presents some of the regularization methods for neural networks.

Parameter norm penalty limits the capacity of the model by regularizing the weights of the neural network. The regularization is performed by adding a penalty term consisting of the weights to the loss function.

is the shrinkage parameter and

is the loss function whereby it could be the mean squared error or negative log-likelihood or other functions depending on the prediction problems.

The penalty term penalizes the weights of the neural network from going too large. This is because, when the training algorithm minimizes

, it will minimize both the loss function and the weights of the neural network. This may cause some of the weights to be close to zero especially if the shrinkage parameter is set to a large value. As a result, units with weight values close to zero switch off. This reduces the chance of overfitting because the neural network capacity is reduced.

The derivative of objective function

The weight update is 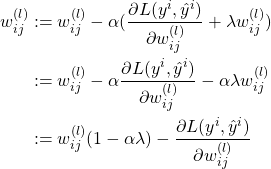 As we can see above, the term

has the effect where

is the number of epochs we will wait before the training is terminated if no improvement is observed. The parameter is known as “patience”.

One of the approaches to improve the accuracy of the prediction is to build several predictive neural networks and combine the predicted values via averaging. However, training a diverse set of neural networks is difficult and expensive due to the challenging task of finding the optimal hyperparameters. Furthermore, neural networks typically require a large number of training instances. Thus, training several neural networks may not be feasible because there may not be enough data to create different subsets to train the networks.

Dropout is a regularization method that approximately ensembles multiple neural networks with different architectures [1]. Dropout works by randomly eliminating a number of units in a hidden layer during the training of the neural network. The method defines a probability of a unit being dropped in a layer. For example, if the probability is set to 0.5, all the units in the layer are dropped at a 0.5 rate. For each weight update, after the instances are loaded into the mini-batch, a set of units of each layer is randomly sampled to be dropped. The mini-batch is then loaded to the reduced neural network for forward and backpropagation. This can be seen as estimating the weights of different network architectures since different sets of units are eliminated as shown in Figure 1. Thus, the randomly dropping out units has the effect of training and evaluating exponentially many different neural networks. At test time, the resulting neural network is used without dropout.

the probability of units to be retained. Therefore, the drop rate is

of being 1. Note that Bernoulli variable can take either 0 (failure) or 1 (success) with the probability of being success is

During training, the forward propagation with dropout is implemented as follows:

is the element-wise multiplication,

is the activation of the hidden layer

Batch normalization is a regularization method that incorporates normalization into the model architecture [3]. Specifically, the method allows each layer to perform normalization on the layer’s output for each mini-batch. The layer normalization has the effect of stabilizing and speed up the training process.

denotes the summation of the weighted inputs of unit

of a hidden layer. We calculate the mean of

The normalization is given as follows:

is a small constant for computation stability. To allow flexibility to the layer to adjust the distribution of the activations, a pair of trainable parameters

are introduced as follows: