, although the hyperplane appears to be a “better” hyperplane, the decision boundary is closer to POSITIVE class. Thus, the misclassification rate would increase especially for POSITIVE class.

How do we find the margin? Given hyperplane

that separates the two classes, we know that

is equidistant from hyperplane

is the feature vector and

are the parameters of the hyperplane. For each instance

These are the constraints that need to be respected in order to select the optimal hyperplane. The first constraint states that all instances belonging to class

and the second constraint states that all instances belonging to class

. By not violating these constraints, we are selecting two hyperplanes (that define the margin) with no data points in between them. Let’s simplify the constraints. We multiply the first constraint on both sides with

We know that for all

We do the same for the second constraint.

We know that for all

Therefore, we can combine the two constraints as follows

is the margin as shown in Figure 3. We know that

is a vector that is perpendicular to the hyperplanes. If the unit vector of

, we get a vector

, where it has the same direction as

and with a distance equal to

. Let the unit vector be

is a data point on

, the resultant is a point on

. We can rewrite the equation and solve for

is minimized. For mathematical convenience, we change from minimizing

You may skip the derivation of the solution and go to parameter solving.

subjected to an equality constraint

, set the gradient of

to zero and find the Lagrange multiplier (parameter)

, and set it to zero

) will be zero, and only a few of them are non-zero. The data points with

From the above, we see the solution for

. However, typically we use an average of all the solutions for numerical stability.

is the set of support vector indices. Given a test point

, the predicted value is

Real-world data are typically noisy and not linearly separable. When the data are not separable, the algorithm above will not be able to produce the solution to the problem. To handle non-separable data, we relax the constraints by allowing data points within the margin. Consider the margin in Figure 4. Three data points are allowed to be within the margin. These “errors” need to be quantified as indicated by

and included in the constraints. The variable

is known as slack variable.

represents the amount of which the data points on the wrong side of the margin. If

, the data point is on the right side. If

, the data point is in the margin. If

, the data point is on the wrong side of the hyperplane.

The combined constraint is now defined as follows:

The equation (constraint) implies that we define an error if the prediction is on the wrong side of margin boundary. This is called the hinge loss. Given the prediction

, the loss function is defined as

is the regularization parameter to control the trade-off between maximizing the margin and minimizing the error. Small

allows less mistakes resulting in small margin. You may skip the derivation of the solution and go to parameter solving.

Using Lagrange multiplier to formulate the optimization problem with respect to the Lagrange parameters.

is the Lagrange multiplier for constraint

Substitute the derivatives into

Upon solving the optimization problem using quadratic programming, data points that lie on the correct side of the hyperplane, their corresponding

, and the others have their

. Of these data points, the ones that lie on the edge of the margin have their

, and the rest lie within the margin with

is computed as follows:

As before, we can use any data point on the edge of the margin to solve

. However, typically we use an average of all the solutions for numerical stability.

is the set of support vector indices. Given a test point

, the predicted value is

are given as follows. Calculate parameter

Given a test point

The algorithm we described above finds the linear model that divides the feature space. However, some real-world data is non-linear and a linear model will not be able to effectively classify the data as shown in Figure 5. As shown in the figure, no matter how we try to fit the linear model, the decision boundary will give a bad classification result. One way to deal with this kind of data is to extend the feature dimension by performing data transformation using basis functions such as polynomial and spline [3]. An example of non-linear transformation is given in Figure 5(bottom) whereby the polynomial basis function is used to map the data points from 2-dimension to 3-dimension. After the transformation, we can easily fit a linear model to separate the data points.

We select a basis function,

to transform each instance

is generally much larger than

. Then, the transformed dataset

is used to fit the linear model

The optimization problem of finding the optimal hyperplane has the same form except the constraints are defined in the new feature space.

Although the mapping of the features to a high dimensional feature space allows the data to be linearly separable, computing the transformation is expensive especially when the dimension is very high. This is because we have to apply the transformation on each sample followed by the inner product. The idea of the kernel trick is that the inner product between the transformed data is not needed. Instead, we require only the kernel function that allows us to operate in the high-dimensional space without computing the data transformation. Therefore, we just need to apply the kernel function,

directly in the original feature space to achieve the same effect.

. Given the set of support vector indices

We use an average of all the solutions for numerical stability. Given a test point

, the predicted value is calculate as follows:

is degree parameter. Consider a dataset with two input features

and a polynomial kernel with a degree of 2.

We can see from the above that the dimension of the dataset is extended from 2 to 6.

is the euclidean distance between the two data points and

defines the spread of the kernel or the decision region of the support vectors. In other words, it determines how far the influence of a support vector in the prediction. A small value of

means large decision region area while a large value of

is illustrated in Figure 7.

Consider the following dataset. Suppose a non-linear SVM with RBF kernel and

is built by solving the optimization problem using quadratic programming. The lagrange multipliers

are given as follows.

All data points are support vectors since all

can be solved as follows:

Given a test point

. In other words, the best-fitted line is the one that has at most

deviation from the target of the training set.

Figure 8 illustrates a support vector regression. The fitted line is indicated by the blue line and the boundary lines of the margin (also known as

-tube) are indicated by the green dash lines. The error of the data points within the tube is tolerated (zero) while for data points that are outside the tube, the loss is the distance between the data points and the boundary lines. Thus, the loss function is defined as follows.

Similar to the soft margin hyperplane in support vector classification, the slack variables are introduced to represent the error of data points that are out of the ε-tube. Thus, the optimization problem is given as follows.

Notice that there are two types of slack variables, for positive and negative errors to keep them positive. We restate the optimization problem by applying Lagrange multiplier. 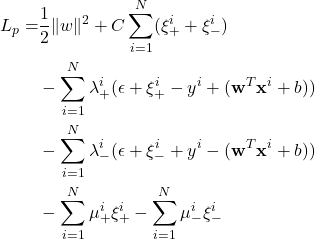 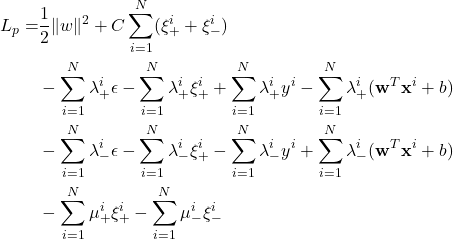 Substitute the derivatives into 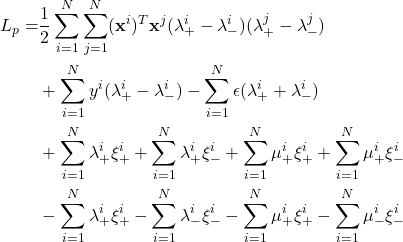 Upon solving the optimization problem using quadratic programming, data points that lie within

. The support vectors have

, and we use them to calculate

can be replaced with a kernel

and we can have a non-linear support vector regression.